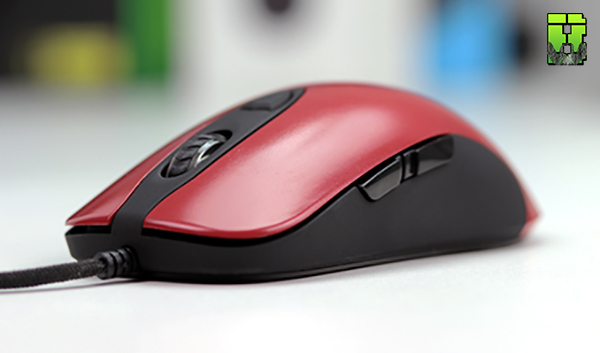 If you have been following my Youtube series you will know that I have decided to take a look at the Dream Machine Gaming Mouse range DM1 Pro, DM1 Pro S and this DM1 FPS. I’m doing this as I’m looking to see what improvements if any they have made throughout the range and whether they are listening to feedback. The only way to do this is to go through them all comparing the differences. The Dream Machine brand isn’t that well known outside of niche communities like r/mousereview but let’s see how they compare to other brands such as but not exclusive to Benq Zowie, Razer, Logitech, Corsair etc.

Price – I purchased mine direct from the Dream Machines online store priced at €55 about £55 or $55. At this price with the cable change, it could be a real steal. 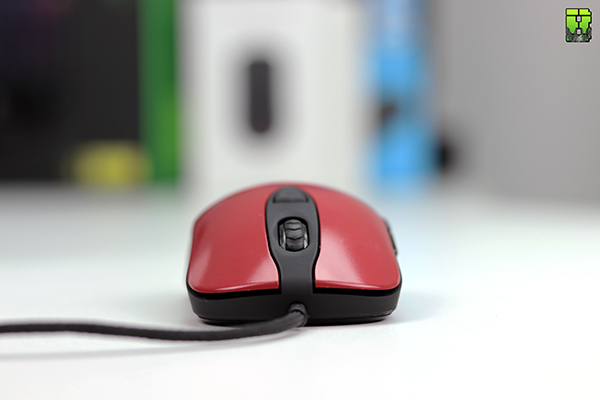 Design/Shape – It’s a traditional fps shaped mouse with a hump three-quarters of the way towards the back and has a sloping front. There are three pads which are C shaped on the base and are a decent size. The logo is no longer LED lit but still says DM in black on this version. It has a six button + a scroll wheel configuration and it’s aimed towards right-handed players. With its even shape ít could be used by left-handed players if they don’t mind the buttons on the left side. It comes in a few colours which are Noir, Blizzard White, Ocean Blue and Blood Red, the version we are looking at here today. The only light now on this version is around the scroll wheel which shows the DPI you are on and for me, this is a nice improvement as I wasn’t a fan of the DM logo lighting up on the rear. If you want to see measurements or more detail on the shape check out my DM1 Pro as this hasn’t changed throughout the version. The cable isn’t braided anymore but we will come on to this later. 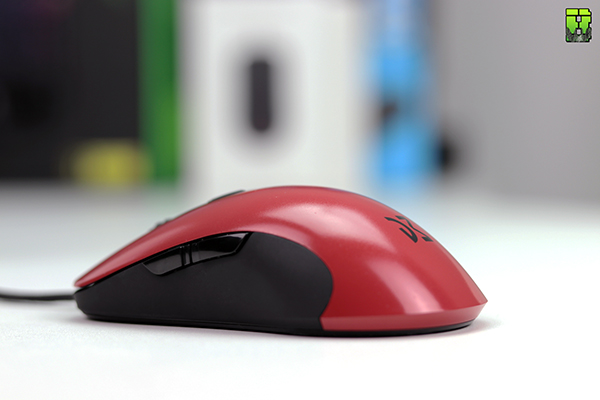 Build Quality – This one unlike the Pro I reviewed recently was not rocking on a hard surface and feels well built with no squeaks, creaks or rattles. The Blood Red paint job isn’t the best and I feel it’s still lacking some quality here. The paint is an improvement on that fingerprint magnet matte black coating. The base is the same as the Pro as well are the sides which are still coated in a matte black. 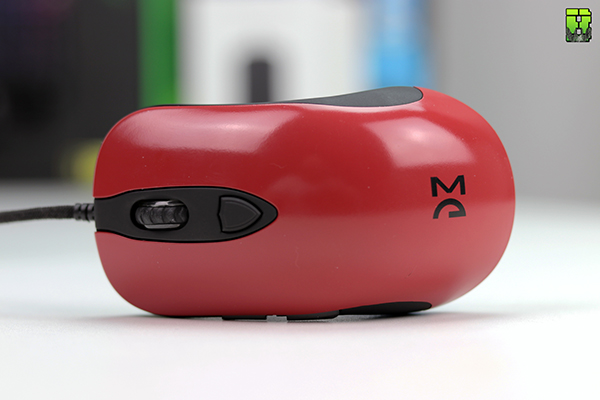 To see the senor tests where I ran through the usual, Jitter, Angle, Ripple, Square lift off as well as slam check out the video on Youtube. 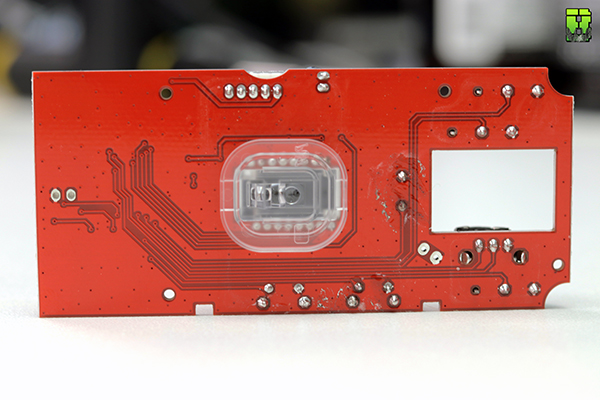 I’ve tested the mouse on 3d Aim Trainer to get a better feel. I have shown the score in the video so that you can compare or try to beat me. To get this score I only have three attempts with the final one being the one I use for the high score. 3dAimTrainer 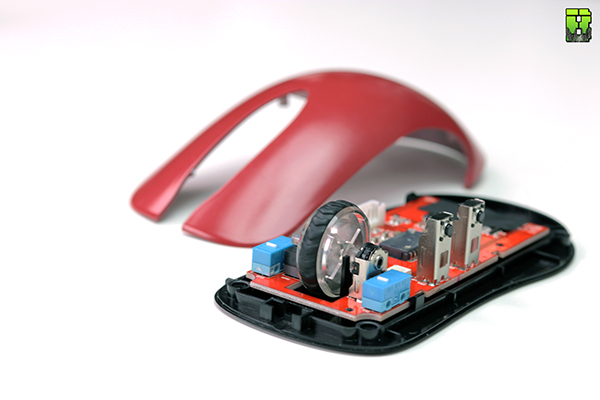 Scroll wheel – The scroll feels the same as all the other version so nothing has changed here. It’s nice and smooth with a light flick to make it move. It’s rated to 20 million clicks and there are some notches but these are easy to feel and require little work to go past them. At high speed when switching weapons this could be to light as I found that I was overshooting. The centre click is ok, nothing good nothing bad and the rubber insert has some arrow shaped groves making it decent that you won’t slip but it’s not for me personally.

Buttons – These have changed from the Omron switches used in the previous version to the Huano 20 million click switches. The Huano switches have that lovely crisp click which seems crisper than the Omron switches. The Huano do feel heavier to press through and in my opinion, make a louder noise. On the left side, the buttons are easy to find and are rated to 3 million clicks.

There is a cut out between these so that you don’t get the front and back messed up but although this is a nice touch it means that for my hand size the front button is too far and requires me to readjust my hand to reach it. I ran the Button Latency Tester as well as the Human Benchmark reaction time tester and found no issues to report. 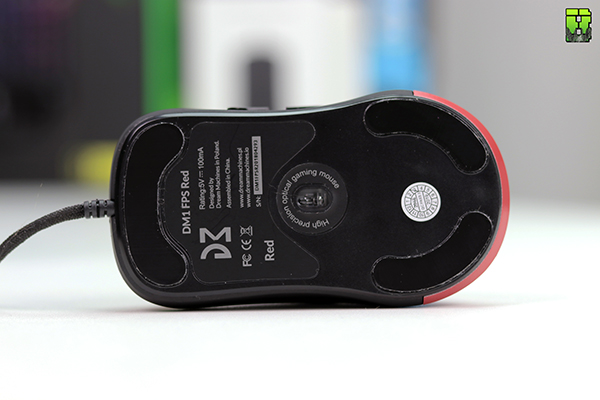 Feet/Skatez and Glide force I’ve now started to do friction tests on the mice using a G640 pad as base and these results can be seen in the video on Youtube. If you also want to see how the standard mouse skatez compare to the Corepad Skates then you can see this video on Youtube

Weight – The Dream Machine website specs say this weights in at 83g and when I weighted them it was 83/84g with a little bit of cable.

Size – There has been no change, its the same as the Pro and Pro S with a body approximately 126x68x39mm but if you want more detail on this to check out DM1 Pro Reviewwhere I go into a lot more on the size. 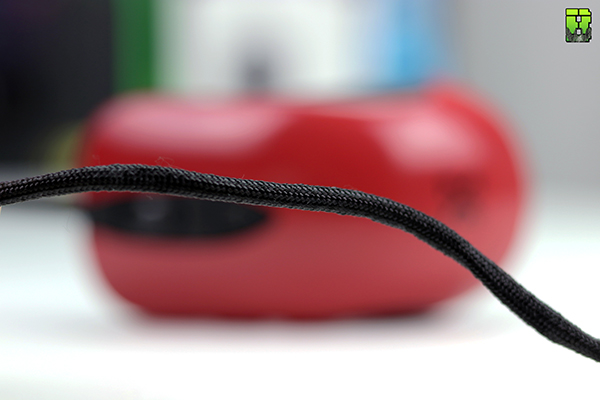 Cable – The cable has finally be changed and is now boasting one of the most flexible standard cables provided on any mouse today. It’s using a shoelace style which is close to a Paracord. In my opinion, the Paracord mod still trumps it but its a damn good cable and will not now require a bungee. It’s also a decent length still coming in at 1.8m long. 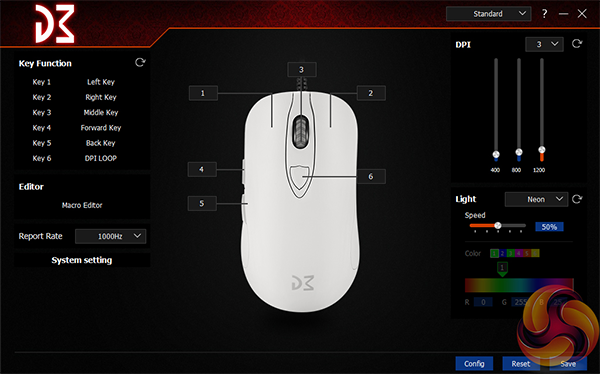 Software – Is still provided but has been updated from the Pro S we went over a couple of weeks ago. I go through all the options that can be configured in the software in the video on Youtube.

Conclusion – Overall this is a well-designed mouse offering some premium features such as a shoelace cable and great shape. What I can’t get past is the 3389 sensor as this for me just didn’t cut it compared to others I’ve tested. I could transplant the 3360 from the Pro S and this would work great and that for me would put this mouse in my top 10 ones to check out. If you do this mod though it would make this a £100 mouse and for me, that isn’t worth it.